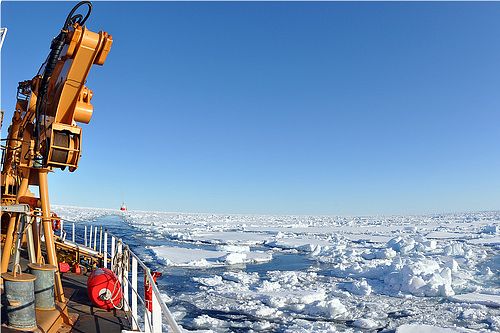 The industry needs to rebuild its Arctic capability
to operate effectively at high latitudes.

Arctic conditions can be daunting with sea-ice as one of the most pervasive challenges. Source: U. S. Coast Guard.

Great rewards are generally preceded by great risks. As the world price for crude oil has risen and remained above $100 per barrel, Arctic “black gold” beckons U.S. producers to “come and get it.” The challenges are considerable, as Shell’s long-awaited attempts to develop its $2.4 billion leases in the Beaufort and Chukchi Seas amply demonstrate.

The last great wave of oil and gas activity in the U.S. Arctic occurred with development of the onshore Prudhoe Bay fields in the 1970s, but new exploration was stymied by declining prices, environmental opposition (Arctic National Wildlife Refuge), and the inherent challenges involved in remote areas with ice-covered waters. Yet, as Deputy Interior Secretary David Hays put it: “Regardless of what happens in the United States, there is no question there is going to be offshore development in other Arctic nations.”

With the 2005 and 2008 sales of Arctic offshore leases, the U.S. government has essentially prepared for the U.S. to follow suit. With Prudhoe Bay fields in decline and the Alaska Pipeline carrying only a fraction of its capacity, developing additional oil fields in the area have broad national implications.

What are the Rewards?

The U.S. Geological Survey’s often-quoted 2008 estimates contend that the Arctic contains 13% of the planet’s undiscovered oil reserves and 30% of the planet’s undiscovered natural gas reserves. This coincides with results from a study performed by U.K. consultants Wood Mackenzie and Fugro Robertson Ltd. Moreover, the North American Arctic is believed to be particularly attractive, with about 65% of the undiscovered Arctic oil reserves. The USGS notes that although there is considerable uncertainty regarding undiscovered Arctic oil and natural gas resources, the potential rewards are huge. In a world with burgeoning energy demands, particularly in China and India, Arctic energy will undoubtedly play a significant role.

What are the obstacles?

Three decades of relative inactivity in U.S. Arctic oil and gas activity have taken a severe toll on the availability of experienced offshore Arctic personnel. The skilled and experienced people who developed the 15 large oil and gas fields discovered more than 30 years ago are likely no longer in the work force. The people who designed the equipment used in field activities, planned and executed the drilling operations, developed the safety plans, established emergency procedures and contingences to be utilized, and actually worked onboard the offshore drilling vessels have long since either retired or otherwise left the industry. A significant offshore Arctic “knowledge and experience” gap exists, just as demand for this type of expertise is also increasing rapidly in other sectors of the Arctic.

Pull quote: “A significant offshore Arctic “knowledge and experience” gap exists, just as demand for this type of expertise is also increasing rapidly in other sectors of the Arctic.”

In 2009, a U.S. Geological Survey article cited the following factors as slowing or preventing Arctic development:

These factors can be overcome with the application of appropriate technology and adequate resources. More challenging is the recent change in the U.S. regulatory environment, particularly changes resulting from the Deepwater Horizon incident in the Gulf of Mexico. The Macondo well blow-out and subsequent clean-up brought intense scrutiny of offshore drilling activity in the popular press and among environmental groups. It also prompted a division of the former Minerals Management Service, creating the Bureau of Ocean Energy Management (BOEM) and Bureau of Safety and Environmental Enforcement (BSEE).

As a new agency focused on industry regulation and enforcement, BSEE issued a comprehensive new policy on August 17, 2012 that clearly extended regulations for the offshore oil and gas industry to contractors and their subcontractors. This new paradigm means that contractors must be concerned about legal liability and the risk that they and their insurers now incur.

The roll call of obstacles – scarce and fragmented expertise, environmental and operational challenges, and intensive regulatory requirements predicated on a recent mishap – appears daunting. Though the potential rewards for oil and gas development in the U.S. Arctic are huge, they come with high risks, high costs, and lengthy lead times – and they could easily become catastrophic. Both operators and contractors need to be aware of the additional responsibility now required by U.S. authorities and develop appropriate approaches to offshore Arctic operations.

Joseph White is a member of Endeavor Management’s Arctic Team. He has over 40 years of hands on technical support and engineering design experience of which 25 years has been Arctic related, obtained while serving on the technical staff of vessel owners and operators. Mr. White earned a degree in Naval Architecture from Mississippi State University.

This Endeavor Insight is brought to you by Endeavor Management, a management consulting firm that leads clients to achieve real value. Endeavor Management’s Arctic Team can provide independent and unbiased oversight when tackling the challenges of the Arctic. For more information contact Bruce Crager, Executive Vice President at 713-459-1215 or bcrager@endeavormgmt.com.

Joe White has over 30 years of hands-on technical support and engineering design experience, obtained while serving on the technical staff of vessel owners and operators. ...