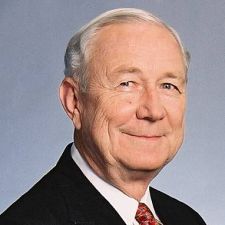 Ron Harrell is a Petroleum Engineering graduate of Louisiana Tech University and continues as Chairman Emeritus of Ryder Scott Company, Petroleum Consultants.  He retired as Chairman in May 2006.  Ron remains active in the industry as a licensed engineer in three states and serves on several Boards of Directors including corporations, universities, and not-for-profit organizations.

He is a Senior Advisor to RSK (UK) LTD, The Carlyle Group, and Morgan Stanley.  Society of Petroleum Engineers (SPE) awards include: the Legion of Honor (2007), Gulf Coast Section Reservoir Description and Dynamics Award (2007), SPE Distinguished Member Award (2007), SPE – AIME Mineral Economics Award (2009) and the Gulf Coast Section Public Service Award (2012). He served as an SPE Distinguished Lecturer in 2007-2008 delivering 34 lectures in 17 countries.  He is also a founding member and continuing Chairman of the Petroleum Engineering Advisory Board for the University of Houston. He also serves on the Subsea Engineering Foundation Board at the University of Houston.

He has provided testimony before several regulatory agencies in Washington D.C., Arkansas, Florida, Louisiana, Mississippi, and Texas, as well as US Federal Courts in Washington D.C., Alaska, California, Colorado, Louisiana, and Kentucky. He has testified before state courts in Alabama, California, Kansas, Louisiana, Mississippi, Oklahoma, Texas, and West Virginia.  He has testified in International Chamber of Commerce arbitrations involving petroleum reserves and resources in North America, Italy, Jordan, and Turkmenistan.